To break a habit of reacting to every problem behavior, we need to turn our intuitive, knee-jerk responses into deliberate, practiced actions. 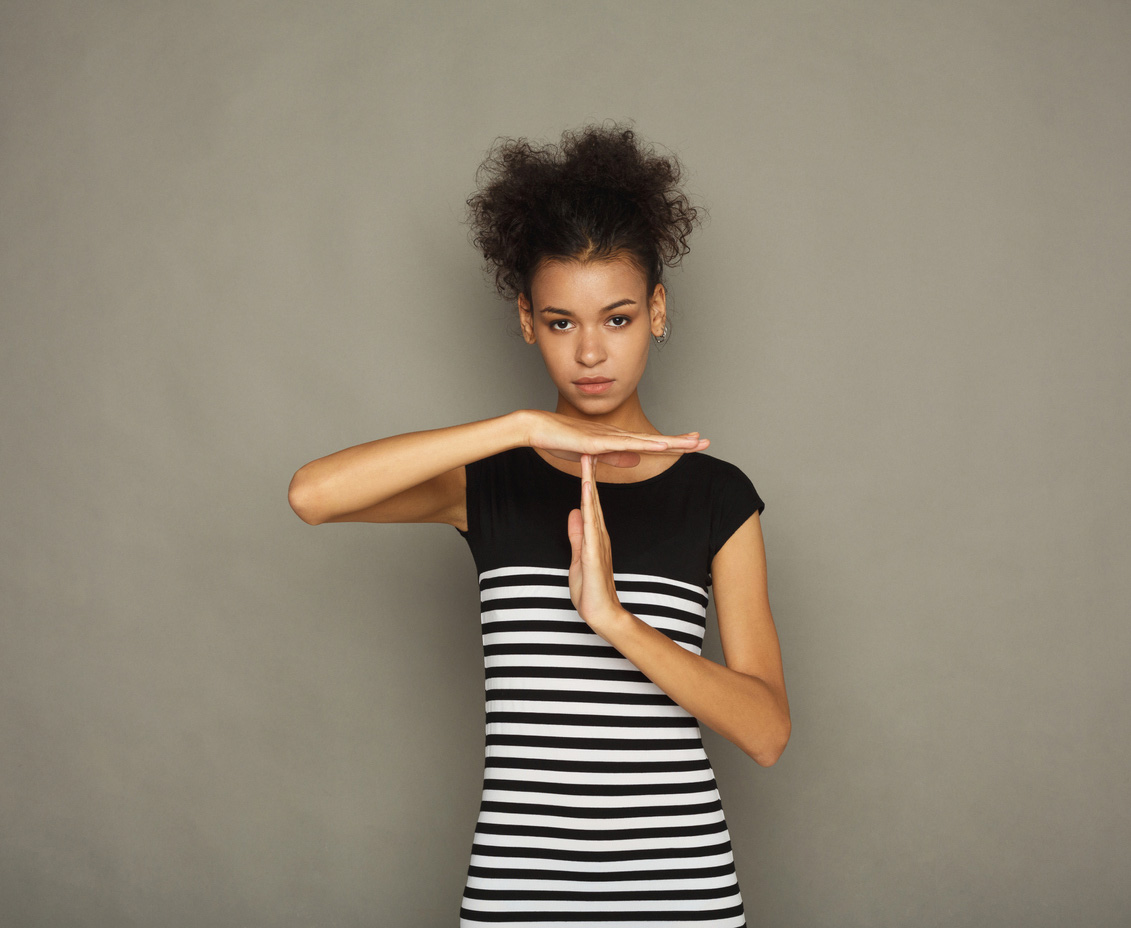 Editor's Note: Schools with consistent referral procedures end up with reliable data to make more informed decisions that benefit students. This is the third article in our series exploring the basics of school discipline systems. We'll look for ways to enhance the things you already do in ways you never thought to do them before. Check out the first article about bending a referral process without breaking it here, and the second article about defining subjective behaviors here.

I get hangry. It’s a special state that happens when I’ve been hungry for so long that now I’m mad about it. When I’m hangry, I have very little patience for anything other than food. I’m not at my best when I’m hangry; my decisions aren’t their best either. Once, recognizing I was in the middle of such a state, my husband asked me what I'd like to eat and I actually started crying. Now, he just hands me a granola bar and we're all better for it. It goes something like this:

Moments like these happen in classrooms, too, and I'm not just talking about your students' emotional states.

I came across Angela Watson’s podcast, Truth for Teachers, while on a search for some of our 2019 favorite things [It’s that time of year!]. Angela is a National Board Certified Teacher with a master’s degree in Curriculum and Instruction who now spends her time as an instructional coach. Her podcast is a blend of realism (how classrooms actually are) and optimism (how classrooms could be). Last week, I listened to her episode called “How to act (rather than react) and stop wasting class time when kids are off-task.” Angela describes a time in her a teaching career when her goal around student behavior was to eliminate all behavioral issues. When a group of students was off task, she’d stop her instruction to give everyone a 30-second lecture about paying attention. One student could give her some attitude. The minute-long standoff between the two of them would derail the entire class and likely end with the student sent to the office. While she was busy putting out every disruptive fire, she unintentionally became part of the problem.

Then one day, something happened to change her whole mindset.

Angela decided to shift her approach from eliminating problem behaviors to maximizing learning time. Student disruptions were going to happen regardless of her attempts to get rid of them. So, why not plan for them? Here’s how she describes it:

“The goal most of us have is to eliminate behavioral issues – to have no interruptions or distractions at all. That’s what we want, right? That’s an impossible goal. We’re never going to reach that..Shifting the goal from getting rid of off-task behavior to instead maximizing learning time is very different. Now the focus is on something realistic and something you can control. Disruptions are expected, anticipated, and planned for. They don’t throw you off your course — because they are part of the course. You only have to respond in a way that helps you make the most of your instructional time. When the goal is to eliminate interruptions, you feel like you have to address every single one of them every single time – really belabor the point and instill fear in kids so they won’t dare to be disruptive again. But when the goal is to maximize learning time, it feels more comfortable to set your ego aside for the greater purpose of keeping the majority of the class on task.” [6:24-7:37]

The stories and strategies Angela describes in this episode align with the research on how we tend to lean on our instincts instead of reacting deliberately in specific situations.

Research on judgement decision making has evolved over time.[1] Early work focused on predicting the decisions we’d make based on a given set of options. Eventually, researchers moved on to study our processes and why we end up making the decisions we make. A model emerged describing two basic decision-making processes: the deliberate vs. the intuitive. When we make deliberate decisions, we play an active, conscious role. We use data. We weigh pros and cons. We look at alternatives and choose the best option. Intuitive processes are more instinctual. They're our automatic, knee-jerk responses based on our experience in previous situations. Cognitive psychologist, Gary Klein, described it this way:

“Intuition is the way we translate our experiences into judgments and decisions. It’s the ability to make decisions using patterns to recognize what’s going on in a situation and to recognize the typical action scripts with which to react. Once...intuitive decision makers see a pattern, any decision they have to make is usually obvious.” [2]

Intuitive responses are your mind’s efficient way of taking in lots of information, recognizing you've been in a similar situation before, and applying that experience to the current context. It's the way I can see a wine glass on a coffee table, hear a loud 4-year-old running down the hallway, and know I better move that glass before I have a brand new red wine stain on my rug.

Here's another example to feel the efficiency of your brain's intuitive decision making. Look at the set of words below. Say out loud the color of each word as quickly and as accurately as you can. Note how long it takes you.

Did you do it? Now, let’s do the same thing again. Say the color of each word as quickly as you can and note how long it takes you.

Which one took longer?

I read the first set in 9.5 seconds – I even felt like I sped up toward the end. The second set took me a painful 26 seconds. I was slower by the end and got frustrated at how long it took me to finish. My brain naturally looked for patterns. The first round’s pattern was clear: The word ‘blue’ was always colored blue; yellows were yellow, pinks were pink. The second set had no pattern, but my brain kept trying to revert to one. More than once I saw the word ‘green’ and said ‘green’ out loud, even though it the word was clearly colored orange or red. Using a pattern (when it exists) helps us breeze through a situation and keeps wine glasses out of a toddler's unpredictable running path. Looking for a pattern where there isn’t one trips up our intuitive reactions.

During classroom instruction, you don’t have the time to stop what you’re doing, assess the student’s primary motivation, determine alternative responses, and select the most appropriate action. When student’s act out, you’re most likely to lean on your previous experiences and go with the easiest – and sometimes the most satisfying – response. The way Angela Watson describes it in her podcast she reverted to yelling across the room to lecture an off-task student because it was:

To break the habit, Angela needed to turn her intuitive response into a deliberate one.

In equity work, there is a concept known as a vulnerable decision point (VDP). A VDP is a given situation coupled with a person’s internal state that increases the likelihood of bias affecting discipline decision making.[3] While the concept traditionally works to address the way our unconscious biases influence the decisions we make, it’s also true there are specific times of the day, or emotional states when we are more likely to react intuitively than deliberately. If you can’t think of what your triggers are, ask someone who knows you really well; I bet they know exactly which button to push to get a reaction from you. One of mine is clearly being overly hungry.

If we know which situations are likely to trigger a harsher reaction, we can plan deliberate responses, and start maximizing learning time for everyone. Here's how.

When you think about your reactions to student behavior, you probably know the times when you’re less likely to make slow, careful decisions. Do you have a guess in mind? You can check your guess with data. Here’s an example:

I went to the SWIS demo account and found a staff member with a fair number of referrals: Donna Lomas. She referred students 40 times during the 2018-19 school year. To figure out her possible VDPs, we go to the Drill Down Tool to find the problem behavior she referred most often. Last year, she referred students 19 times for Defiance.

I have a feeling if we showed these data to Ms. Lomas, she would know exactly what’s going on for her. Based just on these data, my best guess is there are two things going on:

The data give us an outline of the VDP; it’s up to us to fill it in with personal details.

If maximizing learning time in the classroom is the goal, we need to look for alternatives to sending students out of class and away from instruction. When VDPs come up, we need something to remind us to choose the alternative. This is called a neutralizing routine: An instructional response to unwanted behavior instead of a harsher one. It is a quick, clear, doable action that interrupts the chain of events and keeps students involved in instruction.

Take advantage of all your strong classroom management skills and find an alternative response that works to diffuse a situation rather than escalate it. Simple routines might include:

What are some alternatives that work for you?

Step 3: Make a Plan to Use the Routine:

An alternative looks so simple on paper, but habits are hard to change. It takes practice. You’re going to need a plan. Treat your neutralizing routine like your own personal precorrection. If you know you’re about to walk headfirst into a VDP, take a minute to remind yourself of your neutralizing routine. Get it firmly in your mind so when the moment arises (and you know it always arises), it’s fresh in your memory and you’re ready to give it a try. If your routine involves students responding in new, deliberate ways, give them the same opportunity to recall the agreement before the VDP comes up. You could even create a visual reminder in your classroom so when that hot button starts to get pushed, it catches the eye and prompts you to be deliberate.

Get creative. You may not get your response right the first time, but that’s what’s so great about behavior – someone will give you another opportunity to try again.

Your responses to student behavior complete the referral process we started analyzing back in August. Make sure you know those times during the day when you’re more likely to fall back on quick, automatic responses, which often end with students sitting in the office rather than at their desk. Use the data you have to verify those vulnerable decision points. If you don’t have access to the data, ask someone on your school’s team to generate them for you. Think through a continuum of possible alternative responses and find one that feels natural to you. Make sure it’s quick and won’t escalate the situation. Finally, practice that new routine until it replaces the old one.