The Serious Business of Play

When students play, they do more than blow off steam; they practice social, emotional, behavioral, and sometimes academic skills. So how can we incorporate more time to play during the day? Research has some ideas. 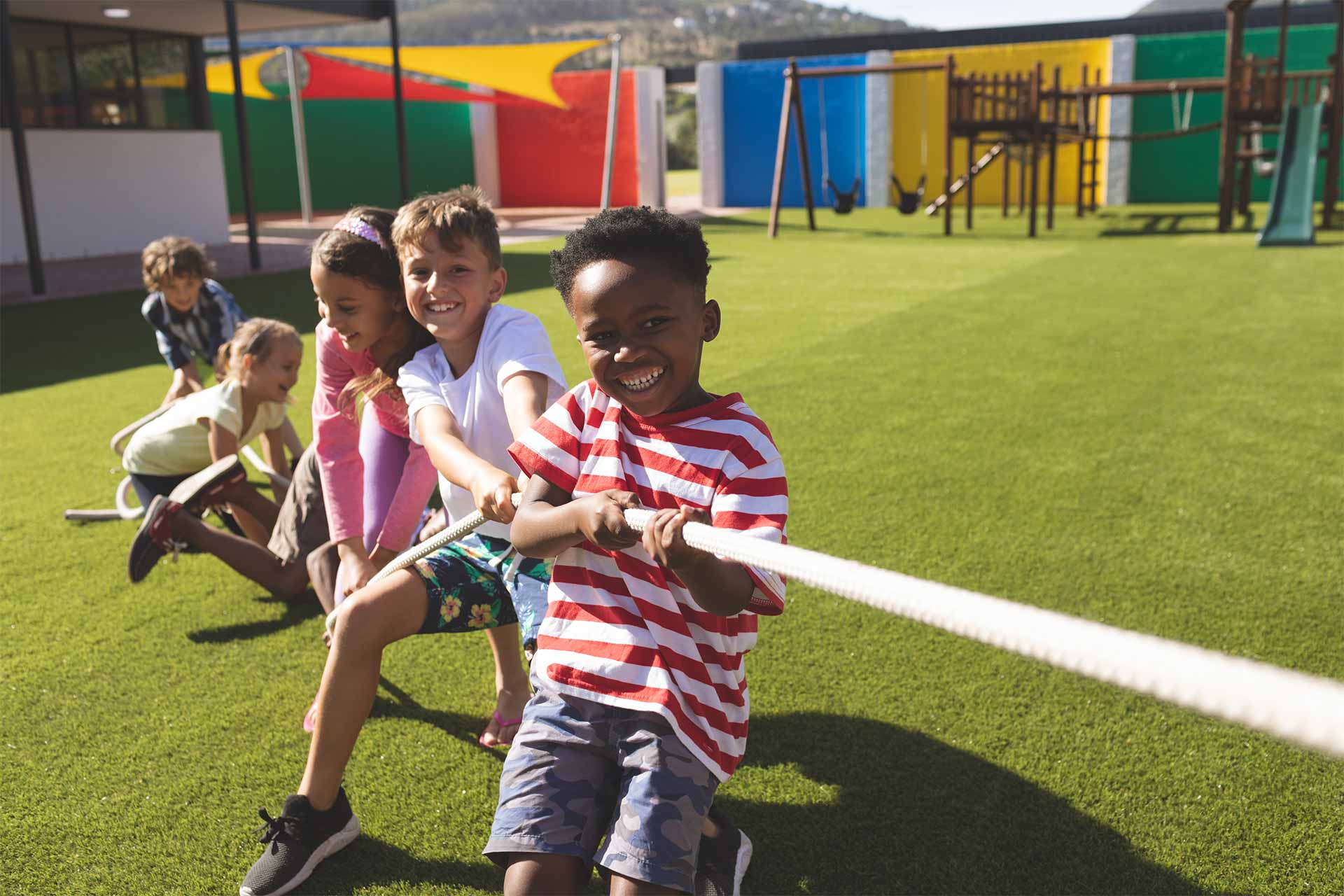 Every so often, our kids circle back to some of the books we used to read when they were younger. Last week, Falling Up, a book of poems by Shel Silverstein re-entered the rotation. The kids like the rhymes and the drawings while I sit there crying over the sentiment. One night, in the middle of my emotional-mom-bedtime-reading session, we came across the poem called “The Folks Inside”. It goes like this:

Inside you, boy,
There’s an old man sleepin’,
Dreamin’ waitin’ for his chance.
Inside you, girl,
There’s an old lady dozin’
Wantin’ to show you a slower dance.
So keep on playin’,
Keep on runnin’
Keep on jumpin’, ‘til the day
That those old folks
Down inside you
Wake up…and come out to play.

These kids are still kids, in spite of the pressure they feel from us to wake up those old folks inside them a little sooner than they should. Schools are no exception to those pressures.

More and more there is an increased academic pressure across all grade levels to prepare for standardized testing. With such an emphasis on academic achievement and test scores, schools across the country are limiting student access to play. “Diminishing recess first began in the early 1990s, and it further declined with the enactment of No Child Left Behind in 2001…To focus on these core areas, districts reduced time for recess, art, music, physical education, and even lunch.”1 When we give students less time for play, we do more than limit their access; we’re also withholding specific social, emotional, behavioral, and academic benefits we want them to experience.

We can think of play and learning as a binary — you’re either playing or you’re learning. Or, we can think of child-directed free play on one end of a spectrum, teacher-directed learning at the other, and a bunch of play-based learning happening in between.

Research has shown time to play gives students the space to practice communication skills, social norms, transitions, sharing, collaboration, and self-regulation.2 [Remember all that talk we did recently on de-escalation? Yeah, play helps with that, too!]  Academically, play helps extend the things they learned sitting at their desk by transferring those skills to the things they do with their peers. Things like manipulatives or playing with shapes to solidify math concepts can all be examples of play that support academic skills.

Giving kids more time to play is a win-win for students and teachers. What would it look like to achieve the same academic standards and give kids more play-based opportunities during the school day?

Don’t worry. Researchers at the University of Toronto wondered the same thing.

In 2010, Ontario, Canada began its transition to full-day kindergarten across the province. Each classroom had to maintain the same academic standards they did before and layer on more opportunities for play.

Researchers, Dr. Angela Pyle and Erica Danniels, observed 15 kindergarten classrooms in three separate school districts and interviewed the teachers to learn about their experiences incorporating more play in the school day.3 The first thing they learned is: All teachers struggled to find a balance between play time and learning time. One teacher said, “The big question is knowing that children absolutely need these [literacy] skills before they leave…how do we make sure that happens while we are taking their lead?” Several teachers weren’t always sure what they were supposed to do when kids were playing.

When we talk about play, we’re mostly talking about that unstructured time where students get to direct what they do. This definition makes play very separate from learning. Of the 15 teachers interviewed, six shared this perspective. Students were either playing or they were learning, never both. In these classrooms, researchers observed 227 episodes of play —86% of those episodes were considered free play where students could choose everything about the activity and teachers weren’t part of the activity.

Play-based learning “unifies play and educational pedagogy…is child-centered and focuses on children’s development, interests, and abilities through engaging and developmentally appropriate structuring of academic learning experiences.”4 Basically, play-based learning is the idea that play and learning can happen at the same time. The remaining nine teachers in the study shared this perspective and viewed play as an opportunity to support the academic skills they were trying to teach. In these classrooms, researchers observed 394 episodes of play — only 60% of those were considered free play.

What about the other 40% of those opportunities? If they weren’t free play, what were they?

The Continuum of Play-based Learning

The 15 classrooms involved in the study weren’t substantially dissimilar to each other in the number of opportunities students had to play. The difference came in the types of play researchers observed. It turns out, there are more ways to play than just playing with blocks and sensory tables. In fact, they saw five different types of play during the study:

We can think of play and learning as a binary — you’re either playing or you’re learning. Or, we can think of child-directed free play on one end of a spectrum, teacher-directed learning at the other, and a bunch of play-based learning happening in between. The level of teacher involvement in that play determines where on the continuum the activity falls. While the continuum of play emerged from research conducted in kindergarten classrooms, researchers also know these types of play happen throughout elementary school…and we say middle and high schoolers are doing some of this, too!

See, this play thing doesn’t have to look one way! The continuum gives you options!

Do you want to know what those options are?

The lead researcher from the study, Dr. Pyle, runs a lab called The Play Learning Lab where they explore all the ways play-based learning can be sustainable and productive in real classrooms. They have loads of information as well as plenty of practices you can implement right now. [The examples tend to be directed more toward early learners and younger elementary grades, but you can certainly adapt some to work for older grade levels.]

Here are the five types of play that make up the the continuum and a few examples from The Play Learning Lab to get you started.

When students direct their own play, that is free play. These activities have very little to do with adults and require basically no involvement from them. In fact, during free play, students have unlimited choices; they decide what they want to do and how they want to do it. Free play opens up opportunities to pretend and use their imaginations.

When the play starts with students and teachers take that interest and use it to integrate academic standards, that is inquiry play. An example from the study happened when a paper airplane flew through the middle of a reading lesson. The teacher saw the interest and decided to help students build a runway. Of course, when you build a runway, the kids are going to want to learn how to fold an airplane to fly the farthest. That led to trial-and-error, which naturally led into learning the scientific method. Who knew all that was possible from one student’s disruptive airplane?

Inquiry play might be the most challenging version of play to incorporate in your regular school day. This is where it starts to feel like you’re flying —no pun intended— by the seat of your pants. It requires you to constantly looking for ways to take an interest and turn it into a lesson. If these opportunities present themselves and their connection to your lesson plan is clear, lean in.

When the academic skills you need to teach are more prescriptive than you can achieve through collaborative play, the type of play that works best is playful learning. In this type of play, teachers direct both the academic outcomes as well as the activity, then students get to extend the play to include things that sound fun to them. For example, researchers observed how one teacher set up a floral shop in her classroom. She created order forms, a menu of options, and the rules for how to order flowers from the florist. After that, students got to request the flowers they wanted for any reason they could think of. One group of students wanted to order flowers for a picnic. They followed the teacher’s game, ordered the flowers, totaled up the order, and delivered them to the student’s pretend picnic with plastic food on the carpet.

When you have academic skills you need to teach and you find a way to make a game out of it, that’s called learning through games. This is the most prescriptive of the play-based learning types and maybe the most common example used in higher grade levels. During the pandemic, many classrooms took advantage of learning apps to help students practice certain academic skills.

No matter how you incorporate opportunities for students to play, whether it’s child-directed, teacher-directed, or somewhere in between, the research is clear: Play gives students opportunities to practice the social, emotional, behavioral, and even academic skills we want them to master. When students make a behavioral error and we withhold recess as a consequence, we’re actually denying them opportunities to practice the skills that may have gotten them a referral in the first place. Everyone deserves unstructured time to do what they want without interference and we can certainly keep looking for ways to make learning a little more fun.